Contentious Responses to the Crises in Spain: Emphasis Frames and Public Support to Protest on Twitter and the Press

Contentious Responses to the Crises in Spain: Emphasis Frames and Public Support to Protest on Twitter and the Press

On this paper we analyse how different types of frames adopted by news organizations and social media affected the support for protests against austerity measures in Spain. We pay special attention to the individual understandings of the crises based on materialistic grievances and non-materialistic accounts of the economic crises. We identify frames using a supervised approach and a dataset of two million tweets gathered during the major demonstrations of the Indignados movement, between 2011 and 2013. Our second dataset includes the news-related content published by the top Spanish newspapers, in terms of circulation, during those demonstrations. We find that the support to anti-austerity protests was conditioned by understandings of the crisis. Frames addressing the political system are negatively related to the support for protest against austerity measures, as compared to those referring to the crisis as economic matter. Additionally, more challenging and controversial frames generated lower acceptance of the protest among the population, than those that primed social problems. 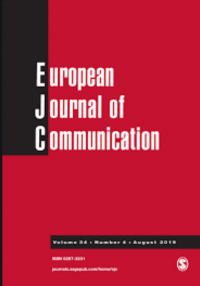 Is Facebook Eroding the Public Agenda? Evidence From Survey and Web-Tracking Data